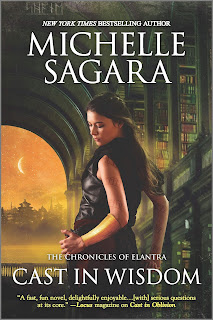 In the aftermath of the events in the High Halls, there are loose ends. One of those loose ends is the fieflord, Candallar. In an attempt to understand his involvement—with the Barrani, with the High Court, and with the much hated Arcanum—Kaylin has been sent to the fiefs.


She has mixed feelings about this. There’s nothing mixed about her feelings when she discovers a very unusual building in the border zone between two fiefs, and far more questions are raised than are answered. Her attempt to get answers leads her back to the Imperial Palace and its resident Dragon librarian, the Arkon.


Things that were lost in the dim past were not, perhaps, destroyed or obliterated—and what remains appears to be in the hands of a fieflord and his allies—allies who would like to destroy Kaylin’s friends, the Emperor, and possibly the Barrani High Court itself. This is bad.


What’s worse: The librarian who hates to leave his library has a very strong interest in the things that might, just might, have been preserved, and—he is leaving his library to do in person research, no matter what Kaylin, the Hawks, or the Emperor think.


He is not the only one. Other people are gathering in the border zone; people who believe knowledge is power. But power is also power, and it might be too late for the Empire’s most dedicated Historian—and Kaylin and her friends, who’ve been tasked with his safety.

Excerpt:
Kaylin watched as flecks of gold appeared in Bellusdeo’s eyes. Mandoran had, once again, managed to set Bellusdeo at ease. Kaylin wondered if that was why he’d chosen to speak when he had. He never treated the Dragon with respect; had the Emperor been present for most of their spats, she wasn’t certain Mandoran wouldn’t be a pile of bleeding ash. Well, ash, because ash didn’t bleed, but still.
“You left the rest of the cohort behind?” Kaylin asked.
“We had a vote, and Helen decided it was safest to send me.”
“She was the tie-breaker?”
“Ah, no. She didn’t consider the first choice viable. But— we can all see what I see anyway, so unless there’s an attack, having more than one person here is superfluous. If Teela had been coming directly to the office, someone would have followed Teela.”
“Not you?” Bellusdeo asked.
“I had to live with Tain for a few years. Compressed into a few weeks, I might add. He’s stuffy and remarkably straightforward. Also, he hates fun.”
“He hates mess,” Kaylin said, as they approached the stairs that led into the Halls of Law.
“Define mess. No, wait, don’t. The problem with Tain—at least for me—is that Teela might actually kill us if we’re indirectly responsible for his death. He’s not like the rest of us; we can’t speak to him without shouting, and even if we can, he doesn’t listen half the time. So…it’s a lot less safe to tail Tain.”
“I imagine it’s safer to tail Tain than it is to tail Kaylin if you’re worried about Teela’s reaction,” Bellusdeo said, frowning slightly.
“You need a better imagination.”

Author Michelle Sagara Q&A:
Q: Your Chronicles of Elantra series is 15 books deep. How do you keep up with the characters and the plot? What do your notes look like?
Sagara: I have a wiki that is not online, and I attempt to keep it updated as I write. This is not always as easy or tidy as it sounds. The wiki (I use VoodooPad) is easily searchable, but I have to remember to search it, and sometimes I don’t.
I am not a visual person, at all. I’ve mentioned this elsewhere, but I had known my husband for years, and it wasn’t until someone in the store asked what color his eyes were that I realized I didn’t know. Since he’s blond (Finnish on his mother’s side), I assumed that they were blue, and after some thought said, “probably blue”, which caused mild confusion. Had I not known my husband for years? I went home and this time looked and paid attention to what I was seeing: they were blue.
Because eye color had not--obviously--been of great import to me, eye color was the start of my note-keeping. I needed to try to track eye color of characters because I knew I’d forget. And… I still got it wrong between books. T_T.
But… the internals of the characters--what they want, where they’ve come from, the experiences that produced them, I viscerally know. Height? No, not really. Shape? Well, I remember which ones are human, Barrani, Dragon, Tha’alani, etc. Hates? Likes? Yes. Goals as well, if they have them. I remember their place in the hierarchies they occupy, because in some ways, that’s part of their interior makeup.
But sometimes, when in the flow of the words, I… don’t remember to go and check the wiki for the details that, in the moment of writing, aren’t important to me.
My notes, however, and all cross-linked to each other, because of the wiki format.
Q: What is it about fantasy that makes you love it above any other genre?
Sagara: This is a harder question to answer, because it’s so specific; it’s entirely Michelle-context. Does that context overlap with other readers? Yes. But not all of it, and not simultaneously.
I’m a product of my culture, my reading culture, and my linguistic limitations; I speak only English, and can only read French with a fifty percent chance of understanding it.
So: books I read and loved when young had fantasy elements, were fantasy. I read a lot of fairy tales. Anything I could get my hands on. Portal fantasy like the Narnia books. Fantasy like McKillip’s Forgotten Beasts of Eld. Fantasy like The Hobbit, and eventually, Lord of the Rings.
I also read a lot of mythology books--at first for kids, and later, translations of plays and sagas that hadn’t been written with children in mind.
I read other books, books without fantasy elements, growing up--but the things that spoke to me most strongly were those. They were the books of my developing reader heart. As I traversed the divide between childhood and not-childhood (does anyone truly ever feel adult on the inside of their own head? I always feel like I’ve gotten better at performing adulthood, but I can’t quite feel it as my base state), I found other fantasy. I also found books like The Left Hand of Darkness.
And all of the reading overlapped with life experiences; everything on the inside of my head, like the soil out of which story grows and evolves.
I loved fantasy as a reader. I loved reading as a reader. When I made the choice to start writing, I wrote what I loved.
Q: Finally, what do you want readers to leave with after finishing your books?
Sagara: I write books because reading books moved me. A lot. I could get lost in a book, sink into it, follow it, think about it, daydream about it.
Parts of that were intellectual, but the drive to be intellectual about a book I’d read came from a strong emotional response to it. What I want readers to leave with is the emotional response to the story and characters I had, and built, while writing it. I want to open a window into what the book made me feel as the writer.
Writing story is, in some ways, building a vessel that is solid enough to carry the emotional weight of the ending.

Thank you to NetGalley for providing me with a copy of this book to read in advance of its January 28, 2020 publication. The opinions expressed in this post are not influenced by having received the book for free.
Posted by Becki at 8:29 AM
Email ThisBlogThis!Share to TwitterShare to FacebookShare to Pinterest