ADULT Battle of the Books

Seeing my library post a few days ago about an adult battle of the books trivia contest was seriously the highlight of my year so far. And I was planning on it being the highlight for most of the year - or at least until the actual battle in April.
But then it took me about three days to form our fantastic four-person team, and then the registration link said the event was full.
I drove straight to the library after I found out. I needed better information than that! Yes, the librarian told me, there were 11 teams registered and the event was full. Ugh!! Did I mention this event is co-sponsored by three different libraries? So they planned on less than four teams per library? They were greatly underestimating our enthusiasm. They added me to the waiting list.
My persistence and dedication to procrastination paid off. While I was supposed to be doing something else, I clicked through the registration link a couple times yesterday. And the second time....wait for it...it let me register! So now we're in :) 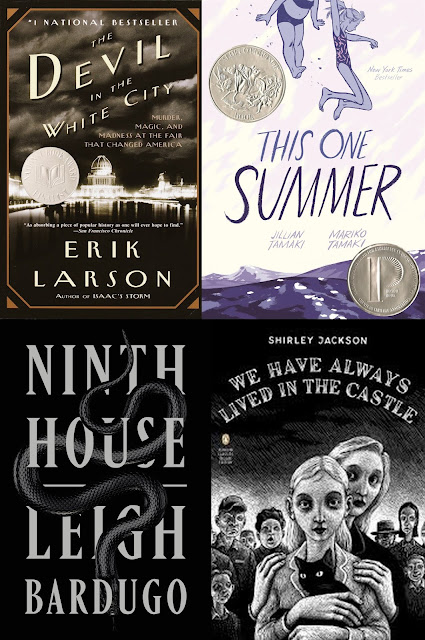 I am so excited!! (and so are my other team members!!)

The trivia contest focuses on these four books (one non-fiction, one graphic novel, and two fiction). The rules say that a team can have from two - six members, and each team must have a cell phone at the competition, which lasts for two hours. Amazon gift cards will be prizes (shh... don't tell them I would have participated even if there weren't prizes!).

Here's link to GoodReads for each book, and a little of my preliminary thoughts:

The Devil in the White City by Erik Larson - Uh-oh. This non-fiction is one of very few books that I've picked up in the past, but never finished. I suppose I'm finally gonna read it all the way through!

This One Summer by Jillian Tamaki & Mariko Tamaki - I've never considered graphic novels to be very strong for me, so I may have my daughter read this one with me (after I make sure it isn't too adult, but the description sounds teen-ish).

Ninth House by Leigh Bardugo - This one sounds good, and also carries with it a GoodReads Choice Award from 2019. That many readers can't be wrong!

We Have Always Lived in the Castle by Shirley Jackson - This one also sounds really good to me! I love gothic stuff, and this old novel will really fit the bill. All the reviews talk about it being really creepy - yay!!


Hopefully our team is diverse enough to cover each others' weaknesses and we can do well when it comes time to test our trivia knowledge. In the meantime, it'll be fun to hang out with some adults and talk about books!


Have you ever done anything like this? I've worked with my daughter a few times for her battle of the books events. There was one in 5th grade (which I show the books in my books read list, but not an overall post about the event), one in 6th grade, and this year's battle which takes place next month.


Posted by Becki at 2:47 PM
Email ThisBlogThis!Share to TwitterShare to FacebookShare to Pinterest

That sounds fun! I've never done a Battle of the Books, I think I'd be as excited as you are about it. :)

So glad your registration was accepted! Sounds like a lot of fun!

I have never done anything like this but it sounds super awesome! And I loved We Have Always Lived in the Castle! SO good. Good luck!! :)

This is so cool!! Good luck