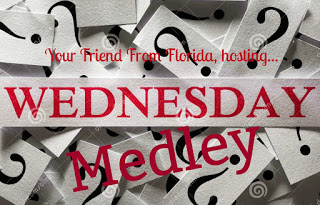 We will be honoring the USA's Independence Day
for the Wednesday Medley (hosted by Your Friend from Florida)!! 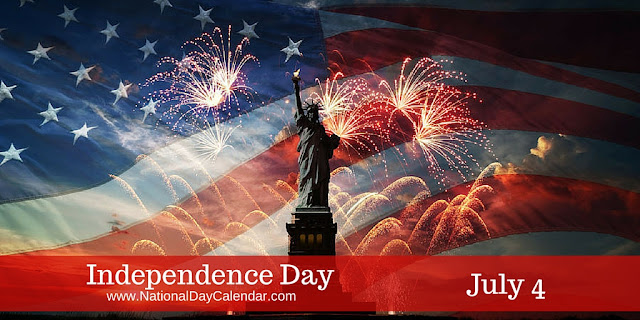 Each year on July 4th, the United States celebrates Independence Day. This federal holiday commemorates the adoption of the Declaration of Independence on July 4, 1776, declaring independence from the Kingdom of Great Britain.
For nearly 250 years, the country has been celebrating a day in history that inspires us still today. On July 4th, speeches and ceremonies are held across the nation. Across the country, people crowd cities for parades and festivals. Streets are decked out in red, white and blue bunting and flags.
While families and friends gather for some of the most mouthwatering food – large picnics and barbecues, local fairs provide a taste of culture and mom’s home cooking, too. With so many converging on their hometowns, family and school reunions take place.

Before the day is over, many communities hold spectacular fireworks displays re-enact moments of victory. Patriotic music accompanies the performance while spectators view the show from blankets strewn along capital lawns or from boats floating in bays. Whether out National Anthem, “The Star-Spangled Banner” or “God Bless America,” many will sing along.  In some locations, music will be played by a live orchestra or band, while in other areas it’s pre-recorded. Some of the most popular on the playlist are “America the Beautiful,” “My Country, Tis of Thee,” “This Land Is Your Land,”  “Stars and Stripes Forever,”  “God Bless the U.S.A.,” “Yankee Doodle” and “Dixie.”
In some parts of the country, people will shoot their own fireworks. Children delight in the bright colors and sparklers. They roast marshmallows and make s’mores.
HOW TO OBSERVE INDEPENDENCE DAY
Use #IndependenceDay, #July4th, #4thOfJuly, FourthOfJuly to share your celebrations on social media.
-----------------------------------------------------------------------------------------------------------
Everything above this line is from the line is from the National Calendar website.
1.  Please share a favorite July 4th memory with us. I hope my Gigi will forgive me for sharing, but this is the first memory that came to mind.... when I was growing up, we always took our mini motorhome to see the fireworks. For many years, we went to the west side of Michigan - Pentwater, Ludington, Grand Haven. And the top of the RV gave us great seats for viewing! Well, this particular year, Gigi had no problems climbing up the ladder to watch with us, but was absolutely petrified to come back down. My dad had to help her put one foot at a time on each rung of the ladder on back of the RV to come back down. We were afraid we were going to have to get the fire department to get her down for a few minutes! She made it :)
2.  How do you plan to spend tomorrow?  If you are working, will you celebrate later? We're spending the middle of the day with some friends. The plan is to go out tubing on their lake. The kdis are really excited. Later in the day, we'll come back to our neighborhood for a potluck and fireworks with the neighbors and some other friends.
3.  Is there a favorite food always reserved for your 4th of July celebration? Not really? Grilling is kind of standard. We'll have lunch at home, but the potluck later on includes burgers and dogs, I think. Oh, and corn on the cob (which I love, but I hate making a mess of myself eating it, especially when I need to be taking care of the kids).
4.  Are fireworks legal in your state/community and does anyone you know put on a display for your neighborhood? Hubby went shopping to the local fireworks store with the neighbor who will be putting on our display. The awesome ones for the whole community were last weekend, but the kids and I were out of town.
5.  Do you have a favorite movie that you always watch sometime during the 4th of July? I love movies, but nothing comes to mind! I'll be reading others' posts for ideas ;)
6.  Share something from your week, please. My week has been a bit topsy turvy. I usually have lunch with a friend, but she wasn't feeling up to it this week. And then today the kids and I had dentist appointments, and rescheduled our usual Thursday library day. The only thing that makes me a little crazy about summer is the inconsistent schedule. This has only been getting worse as I get older. LOL
Wishing you and yours a safe and happy Independence Day!!

Posted by Becki at 7:24 PM
Email ThisBlogThis!Share to TwitterShare to FacebookShare to Pinterest
Labels: Wednesday Medley

Hello and thanks for joining the Medley today! I am glad to read that there are quite a few neighborhoods that still get together and have pot-lucks and cookouts for the 4th. It is how I grew up and I loved it. Have fun on the lake with the kids!! Happy 4th!

Your 4th of July plans sound like so much fun! I hope you enjoy!
The book I wrote about is so good! I am planning to read the author's other book next. It is called The Smell of Magnolias and Memories. I also want to read the book Jenna Bush Hager recommended Evvie Drake Starts Over by Linda Holmes. I better get busy reading....hahahaha Loved your answers! Have a great 4th of July!

So glad you retrieved your Gigi. Cute story. We stopped at a fireworks tent today and picked up some things for the grandkids. I think they'll like them.

I love the story of your Gigi! What a fun memory to have.

Sounds like a fun day tomorrow. Tonight before church, the guys grilled burgers and hot dogs for everybody. It was a great time. We are going to friends tomorrow. I love your story about poor Gigi. Glad your dad got her down.

I'm a schedule kind of person too & when its not the same, it bugs me too!
HAHA - that would be me with the ladder. I can go up, but when you have to focus on coming down... whole other ballgame!!!! LOL
Happy 4th!

Sorry I'm just getting to comment back...we've been to TN and back and it's back to the old grind. I hope you enjoyed a fun-filled 4th of July!