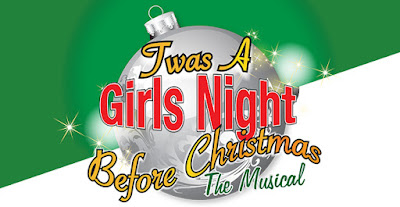 Who wouldn't love a fun night out with friends to break up all the commitments and stress of the holiday season? Read all the way to the end for a chance to win tickets to a very funny show for you and three friends!


BUT you have a chance to win four tickets to the December 14 performance! Enter using the widget below. I will contact the winner on November 28. If I don't receive a response, a new winner will be drawn on November 29.


Twas a Girls' Night Before Christmas


I received tickets to the show for promoting, but all opinions are my own.
Posted by Becki at 3:08 PM
Email ThisBlogThis!Share to TwitterShare to FacebookShare to Pinterest

This looks like a lot of fun. The perfect show for a girls night out with friends. I think we all get a little stressed around the holidays.

Tis the time for holiday themed shows! Winning these tickets sound like they'd make for a great girls night out for some lucky ladies.

Does anyone know if this show is ok for older children to see? Not little children, 9 yo

Hi Carol: All I've seen are the promotional blurbs, but a lot of humor I'd think of for a girls night out would not be 9-year-old appropriate ;)

Show and drinks is a perfect girls night out!

I enjoy seeing a movie or going out painting for girls night out.

A girls night out doesn't need to be costly. Just a coffee and lots of laughter.

I think this would be a wonderful gno!

We especially love to LAUGH a lot and we love live plays and musicals and things like that so this would be perfect and it would be extra perfect because my daughters are also my friends and they are adults, and or maybe my awesome sister in law and one and only adult niece could come with me, and/or, my cousin who grew up with me as a best friend/like a sister, heck honestly even my HUSBAND would LOVE to go, he's SO MUCH FUN not to mention he is literally my BFF!!!! AND on top of all of that, my 50th birthday is Christmas Day and this would be SUCH a fun way to celebrate with several of my loved ones! Thank you for the chance.

Such a fun giveaway. Would love to win some tickets too!

Usually dinner and a movie

Granddaughter turns 21 on December 14th. This would be perfect for her and her girl friends.

Dinner and a show.

This looks so cute! I can't go on the 14th, but will have to check on the other dates, it would be a fun girls night out!

Love plays movies and dancing on a ladies night out

This would be great! Thanks for the opportunity honey!

This looks like loads of fun honey! Thank you for sharing this :)

This would be perfect for the girls night out my friends and I have been trying to plan!