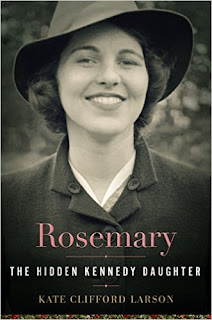 Funny-ish story: I forget why I stared reading this one. LOL

While I started it over the holidays, I finished it yesterday, which was definitely in 2017. So, as the 13th category (a book by or about a person who has a disability) on the 2017 PopSugar Reading Challenge, I completed Rosemary: The Hidden Kennedy Daughter by Kate Clifford Larson.

I forget why I read it, but I'm glad I did. Also amusing, I kept waiting for more of a 'story-telling' style to start, since I was surprised to be reading about Rosemary later in her life, but my Kindle showed I was only 35% finished. It turns out, there's a LOT of notes at the end. This book was very well-researched by the author.

Rosemary is probably to be credited with being the driving force behind a lot of the legislation protecting those with disabilities, but not intentionally.
Growing up, she was largely hidden, especially by her mother and father, who didn't want the stigma of a 'less-than-perfect- child. While the other Kennedy children seemingly loved and accepted Rosemary for who she was, her parents spent a lot of time finding placements at boarding schools and such throughout Rosemary's life.

During a decline in her 20s, the decision was made (although there's no concrete evidence of exactly who may have been involved) for Rosemary to have a frontal lobotomy. This, unfortunately, sealed her fate. She went from an intellectually and emotionally challenged young woman (a clear diagnosis is never really given, other than the term 'retarded' which fit for the day), to a woman with physical disabilities and extremely limited communication skills and speech.

The original cause of Rosemary's challenges is presented as a probable birth injury from limited oxygen at her delivery, when the nurse didn't feel prepared for the actual birth, and the doctor was delayed due to a local epidemic at the time. This made me so mad for a large part of the book. Often called one of the most attractive Kennedys, who knows what Rosemary's true potential was.

The bright side indeed was the efforts of several of her siblings, including President John F Kennedy and Eunice Kennedy Shriver , to create more acceptance and opportunities for those with disabilities. While Rosemary likely never realized the extent of her impact on her family, its positive effects continue into the present time.
Posted by Becki at 1:21 PM
Email ThisBlogThis!Share to TwitterShare to FacebookShare to Pinterest
Labels: 2017 Reading Challenge

Interesting. I think I have heard of Rosemary but only in passing. So she was JFK's sister, then?

Sounds very interesting. I had not heard of her at all. I think I might enjoy reading this book myself. Glad I stumbled onto your blog post.

Thanks for the review. I didn't know there was a Rosemary.

Wow, this sounds amazing! I'm going to have to read this- definitely up my alley. It is so sad to hear about her frontal lobotomy, but you're right- she will never know the effect that she had for those with disabilities. Nice to know that there was a positive thing that was able to evolve from her problems. Thanks for sharing this book!

So sad! That breaks my heart!