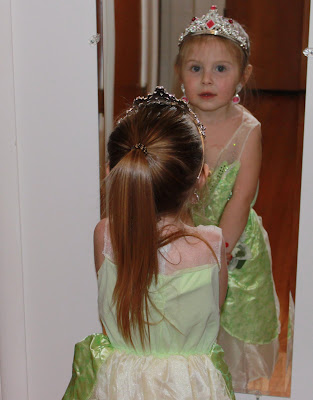 As most families do (at least I think they do!), we spend a lot of the time in the week or so before Christmas visiting and catching up with loved ones we won't probably see on Christmas day.

Our first visit Christmas week was to Grandpa and Grammy's house, where we also saw some of Maggie's aunts and uncles. Maggie was thrilled with the Tiana outfit and accessories that Grammy picked out for her. Once she got into that, though, we forgot to get pictures of everyone else! (Did you really want to see pictures of a bunch of adults? Hahahaha)

If you ask Maggie about what she got at Grandpa and Grammy's, she'll usually forget to mention the Knuffle Bunny book and even the princess color-wonder book, but she will recite an itemized list of the dress, shoes, tiara and earrings. If only we lived somewhere warmer she wouldn't get upset each day when I have to explain that princess dress-up clothes are for in the house, at least during Michigan winter! 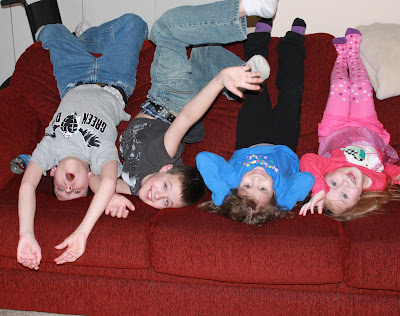 A couple days later, Maggie and I headed to meet a couple of my cousins and their kids at my Grandma's house. Maggie calls her GG (for great-grandma).

There were a few cousin's kids a little older, but they held little interest for Maggie. She had a ball playing with my cousin's nine-year-old twin sons and daughter who is almost a year older than her.

I love this shot of the four of them standing on their heads on GG's couch :)
Posted by Becki at 11:25 PM
Email ThisBlogThis!Share to TwitterShare to FacebookShare to Pinterest
Labels: Photos