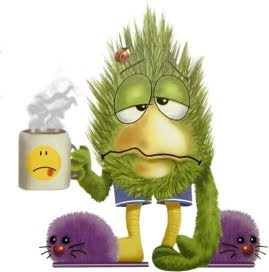 I'm not sure if it's good timing or bad, but as soon as he had to go back to work, hubby started getting that annoying, tickley cough in his throat. I was ready to just yell, "TAKE SOMETHING," that first evening, as I sat working on my computer and he was surfing on his laptop down the hall, until I remembered I had just the thing. Complete Health had sent me a package of their flu vaccine, Respiratory Guard, to sample just that afternoon. Perfect timing on their part!

I walked down the hall to where he was working and lovingly set two lozenges by him. As I turned around to get a snack, he told me the packaging was not the sort to be opened without scissors. So I cut them open for him. I read the package to him stating that he could chew the lozenges or allow them to dissolve in his mouth. Considering the problem taken care of, I went back to my office to work.

Of course I had asked him to tell me his impressions about the product so I could write my review, but I can't actually spell his first impression. I think it was, "Arrghh! Ugghh!" He was solidly not a fan of the flavor. As I went back to peek at him, he was grasping desperately for the glass of water I'd left on the table after dinner.

His cough hasn't gotten worse, so I'm hoping the flu vaccine lozenge he got down had some benefit for him. But I have to say if that was his result from chewing, I don't think it would be too pleasant to allow the lozenge to dissolve in your mouth. Hopefully others found the taste more palatable.

This review is a result of a feedback campaign by Respiratory Guard. The recipients were asked to give their honest opinion about the product they received. Good reviews were not incentivized and poor reviews will not be censored for their opinion of the product.
Posted by Becki at 4:41 PM
Email ThisBlogThis!Share to TwitterShare to FacebookShare to Pinterest

Good timing! Here's hoping it worked and he doesn't get any worse off.

try vicks on his throat at bedtime. I tie a cloth around my neck too. I really keeps everything loose.

If it doesn't taste good then people aren't going to take it. I hope your hubby is feeling better fast.