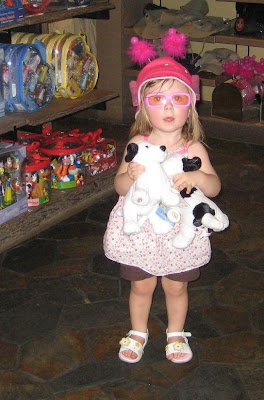 We pulled into Fort Wilderness Campground on Thursday and just spent the afternoon poking around and seeing what there was to see. One of the places we stopped that ended up way more amusing than it should have been was the Settlement Outpost store. We were trying all sorts of fun stuff on Maggie, like this fuzzy antenna headband that even had a battery compartment that must have meant it would light up too! Maggie was more concerned with some Webkinz stuffed dogs she'd spotted. 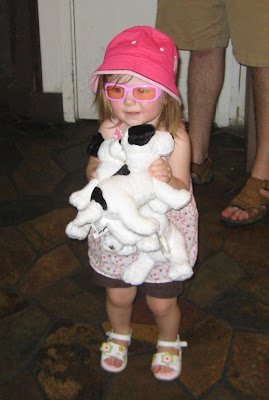 Luckily, she didn't grow too attached to the headband, but the dogs were another story. It was hard to even get a picture of her with them because even though it was hard to hold them all, she knew that we'd eventually take them away and tried to stay on the move. I think three was the most she collected, since the majority of them happened to be displayed on a shelf just out of her reach.

I don't think we ended up buying anything on that trip to the store, but not for lack of Maggie trying! We are so fortunate she's so well behaved usually - when it was time to go I explained to her that the dogs lived here and we could visit them later. We were able to get them back to their shelf and quickly escort Maggie back outside with no tears shed!
Posted by Becki at 9:32 AM
Email ThisBlogThis!Share to TwitterShare to FacebookShare to Pinterest
Labels: Mommy, Photos

I was amazed that she just let us put the animals back. You are an AWESOME Mom!!!

I just love the hat and sunglasses. She is soooooo cute!

yeah for a quick exit!